Whether you want to be a graphic designer or are just working with one, there are some terms that aren’t so straightforward. To get you started, here is a list of common words that can be hard to understand if you’re from outside the graphic design world. Graphic Design Lingo Revealed:

Crop Marks: Also known as trim marks, crop marks are two dashes on each corner to tell the printer where to cut the page.

Bleed Mark: Signifies the area of the page that will not be printed. Bleed marks are used when a designer wants a picture to bleed off the page.

Die Cutting: Refers to cutting out shapes or pictures on a page.

Picas (p): Unit of measurement typically for column width in newspapers, magazine and ad layouts. One pica is 1/6 of an inch.

Points (pt): Unit of measurement typically used for line spacing and length of a column.

Serif vs. Sans Serif: A serif refers to small decorative strokes found in different fonts. Serif fonts are typically fancier than a sans serif which tends to be more simple. A common serif font is “Times New Roman” and a common sans serif is “Arial.” Serif fonts are best used in print because the bottom part of the letter helps guide the reader’s eye across the page. Sans serif fonts are better for the web because serifs can make the text look blurry on a screen.

Kerning: When letters are too far, or too close apart from each other, kerning is used to make the letters in the word look more uniform.

Leading: Refers to the spacing in between lines in a text. Leading can be described as either be “too loose” or “too light.”

Rule of Thirds: An asymmetrical competition guideline to help designers to create balance.

Lorem Ipsum: This is known as “filler text” which is commonly found when creating new layouts. It’s made up of Latin words that replicate the look of English text.

Orphans: One or two words that fall at the end of a paragraph on their own line.

Widows: A short line of words (typically the end of a paragraph) that end on the next column.

Rags: This refers to a bumpy vertical column 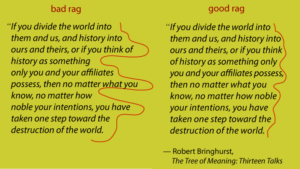 of words. Rags tend to appear when areas of texts are too narrow. (see picture to right)

Analogous Colors: A group of three colors that are next to each other on the color wheel.

Complimentary Colors: Two colors are located directly across from each other on the color wheel.

Triadic Colors: A group of colors that are equally located three colors away from each other.

Hue: Refers to the pure color, without value

Value: Refers to the lightness or darkness of a color

CMYK: Cyan, magenta, yellow, and black are subtractive colors. CMYK is best used for an end product that is being printed.

RGB: Red, green, and blue are the additive colors. RGB is best used when the end product will be on a screen.

About the Author: Shannon Greenberg